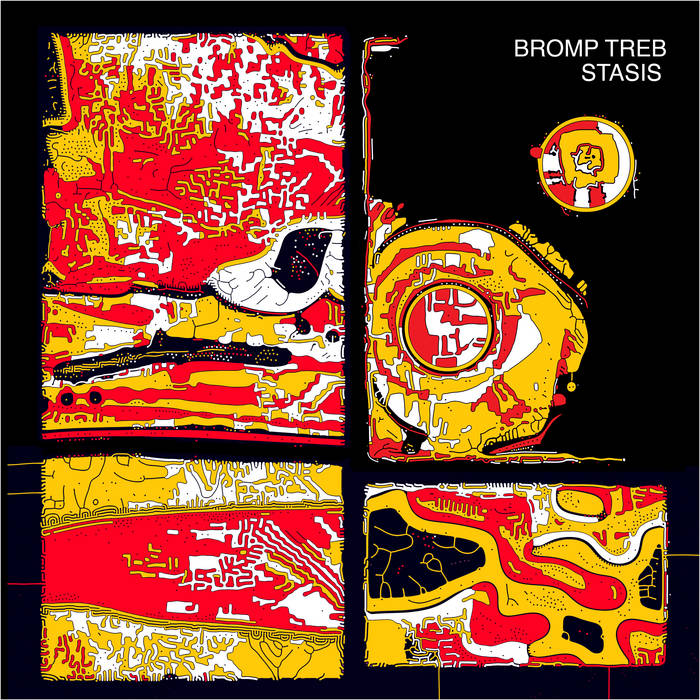 This recording was made entirely with the Shbobo Shnth and a little bit of my voice, which went through a delay pedal.

While there were some tape speed manipulations as well as some edits made digitally with destructive brute force of open source Audacity software, the sounds that you hear on this recording were made in real-time, jumping through patches and playing in a thicket of SHLISP.

The cover art is from computer illustrations by Alexander Dupuis.

Below are some longwinded thoughts on how this recording came to be.

In Spring of 2014 Peter Blasser sent me an old prototype version of a computer music instrument he had designed with Steve Korn called the Shbobo Shnth. While Peter was nice enough to load it with a Bromp-ready preset he wrote for me, the Shnth still required that I learn to write code. While I thought I was up for the challenge, after several frustrating dead-end sessions of trying to learn the thing, I gave up. Clearly I lacked the patience and tenacity that the instrument called for.

At the time, I was making sounds with the typical noise table setup: a tangled pile of effects pedals, mixers, cheap synthesizers, hacked electronics and all different kinds of tape machines. Convoluted signal paths would be arranged to coax out intricate sonic textures, foregrounding faulty chain reactions and sputtering failures. For every show or recording session, I would reconstitute the setup differently to try something new. This system was immediate and physical, and I learned to know exactly when something was going wrong and when to joyfully milk that wrongness. I’ve done this for years, in fact, this shtick is likely a crutch, but I digress.

Eventually I endeavored to figure it out, using a process that is messy, full of cul de sacs and not all that different from the noise table style antics described above. Instead of plugging and unplugging things, I’m now changing numbers in nested parenthetical phrases, loading the code, and listening to what happens. I go through many periods where the code that I am writing is just so faulty that the instrument freezes up and does nothing until I go through a five minute reset process. Do I know what I am doing? What is this thing?

The Shnth runs on a computer language called SHLISP to generate/synthesize sound. SHLISP synthesis ‘presets’ or patches are written by the user on a computer, loaded onto the Shnth and then can be performed with the instrument independently from a computer. The output is a stereo audio via a mini jack. The Shnth has four touch-sensitive wooden bars, eight buttons, two antennae and one reset or “tare” button (for the antennae-control parameters), a USB port and an ON/OFF switch. Eight LED lights and the stereo mini output serve as the only sources of information feedback for the user when not tethered to a computer. There is also a mini jack and a mono microphone for inputting audio, but while I am familiar with it, I really have yet to explore that function.

SHLISP patches can be written in two ways - as text code or by using a handy visual interface application called FISH. As I lack any natural aptitude for coding/programming, I generate my patches through FISH and often can reverse-engineer glitches by looking at and manually editing the SHLISP text. Much of what I have learned about coding for the Shnth has been about uploading other user’s code, understanding how certain lines behave and then rewriting.

While all of this might vaguely read like straightforward coding 101, the designer’s writing and speaking on the subject of their instrument is esoteric and thick with metaphor. I am not sure whether to blame their communication style or my own laziness for my slow-learning, but also I find that the garden-variety nomenclature for coding and synthesis to be just as confusing, so there’s that.

As with any audio-visual synthesis, SHLISP patches can be built to exhibit a range of behaviors such as ‘presets’ for an instrument to be played, or as a composition that unfolds, or as a system that self-generates. The space separating these behaviors is very fluid. In the same single upload, I can have patches that only respond to the slightest gesture, or that only relay a melody or set of rhythms, or that can trigger a combination of cascading and mutating events. At least that’s what I’ve observed and what I think I’m doing, but maybe I have no idea what I’m doing. In any case, I appreciate anything that rewards a bit of divination and helps annihilate the concept of mastery.

Is this stasis? At what point does novelty or shock become expected and normal? Are _____ worse or better or just the same?

Bandcamp Daily  your guide to the world of Bandcamp